Home What we do Projects Resources About us Contact Us

I hope that you are all keeping well and safe in this time of uncertainty due to the Coronavirus pandemic.

The MECS e-cookstove project has come to an end and we have submitted our final report. We hope to make the results of the project available soon on our website. We have produced a short video about it that you can see on YouTube at https://youtu.be/JYjlsJHj0IY

One of the final parts of the project was another trip to Malawi to build the prototype out there. John flew out at the end of February with some of the e-cook stove components in his luggage. As it included bags of white powder (the phase-change material, erythritol) and the electronics for the power optimisation device he hoped that he didn’t get stopped at customs. I’m pleased to report that everything arrived safely.

Construction drawings had been sent to Aquaid Lifeline in Malawi before the trip and they had made the components of the e-cook stove structure so once John arrived it just had to be assembled.

As with any prototype things didn’t go to plan but that is all part of the development process and it enabled improvements to be made. One thing that was less easy to improve was the weather. It was the rainy season and most days were overcast with little sun which was a problem when trying to use solar power.

However there were a lot of positives from the visit. The solar powered heater plate was used to cook maize porridge by Beata, one of the locals. Beata makes and sells mandasi, a type of donut. She fries the dough mixture in a pan filled with oil. John visited her home where she does this and helped her to cook some. One adaptation of the stove could be to turn it into a deep fat fryer to make street food such as mandasi.

Another contact made was with the people from Mary’s Meals. Mary’s Meals is a UK charity that provide hot meals to primary school age children around the world. In Malawi they provide what is sometimes the only meal to a third of all primary school children. Our e-cook stove could be used to preheat the water used to make the porridge which would save many tonnes of wood. It is estimated that in Malawi they heat 260 tonnes of water everyday to make the meals, all done using wood fuel.

There was a lot of local interest in the e-cook stove. One young man, who was Aquaid’s top pupil last year, was very keen to learn all about the stove and the electronics connected with it. He spoke and understood English well and, after John had explained it all to him, he was able to tell others about it in Chichewa, the local language.

Although the grant funding has now finished we are hoping to continue development work on the e-cook stove. 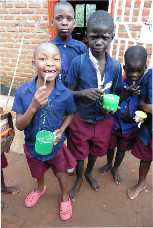 In this time of trial and uncertainty across the world I thought I would give you news about SOWTech and what we have been doing. Firstly we are all fit and well. John was ill with COVID-19 at the start of the pandemic but is fully recovered now.

Work has continued on developing solar cooking and heating trying to improve the efficiency and effectiveness of it. We have also been looking into solar pumping and ways of heating Flexigesters to aid the digestion process. POD development has also continued. This is our Power Optimisation Device that allows the energy from solar panels to be used directly without the use of energy storage batteries.

We have also made an exciting new alliance with Moringa Miracles Ltd (MML). MML are a Malawi registered organisation who are working with over 20,000 smallholders in southern Malawi and are bringing them together into cooperatives to grow, process and sell their moringa leaves. The aim is to enable the potential development of a circular economy where donor/aid money is spent internally in Malawi through the purchase of smallholder moringa to support feeding programmes.

I don’t know about you but I had never heard of moringa so here is some information about it. To start with it is a tree, Moringa oleifera is its scientific name nut it is also called the drumstick tree, the miracle tree, the ben oil tree, or the horseradish tree. It is native to India but also grows in Africa. It has been used for centuries as a medicinal plant but has recently become very popular as a nutritional supplement. You can find it in the western world in health food shops. The leaves are the most nutritional part. It contains, amongst other things, vitamins A, B1, B2, B3, B6 and C, and essential minerals such as calcium, potassium and iron. The MML website has links to scientific papers on the nutritional and medicinal benefits of moringa. The powdered dried leaves are already being used by organisations and governments in their feeding programme in countries such as Kenya. More over as it is a tree its leaves can be harvested all year round.

So where do MML and SOWTech come into the moringa story. MML want to be able to help the smallholders sell their moringa leaves on the international market but to do that the dried moringa leaf needs to be dried uniformly and hygienically. SOWTech are looking at working with MML to develop processing hubs where the leaves can be dried under cover by fans powered by direct use solar using our PODs. The hubs would be places where the leaves are not only dried but they can also be stored and milled ready for sale. We are applying for grants to help finance this exciting project and hope to be able to start the proof of concept work early next year. Check out MML’s website for more details of what they do.

I recently had the privilege of going out to Malawi as part of the ecookstove project. I was the guest of Aquaid Lifeline at their Children’s Village at Namisu where I was met and hosted by Josie Charter, one of their trustees from the UK.

The purpose of my visit was to find out first hand how and what the women cook in rural communities and to get their input into the design of our ecookstove. I spoke to a number of ladies both in the villages and in the Children’s village. The staple food is nsima, a thick porridge made from maize flour. This is normally eaten with boiled red kidney beans and a vegetable relish. In the villages they cook on three-stone wood fuelled fires that are outside of their houses. The ladies get up at 4am to light the fires and cook a maize porridge for the children before they go to school. The ladies buy in all their wood fuel which is a big expense for them, 30-40% of their income, especially as the cost of the wood can double in the wet season.

Some of the design outcomes from my visit was that solar power stoves would be welcome. The stoves would have to mimic their current stoves as the stirring of the nsmia is important so an enclosed oven type stove would not work. A stove that had more than one hotplate would be an advantage as it would allow the nsima and kidney beans to be cooked at the same time cutting down on the actual time spent cooking.

I also visited a number of schools with Josie. At one of these schools the older students held a debate on the impact of new technology. It was initially focused on internet and mobile phones but after they were told why I was there they discussed using solar power for an ecookstove. They were very enthusiastic about especially as they were very aware of the problem of deforestation. The other advantages they highlighted were less contamination in the food, money saved from not buying wood, it would be cleaner and more healthy. Their concerns were the initial cost of the stove, the food might taste different and that it might take longer to cook.

Another highlight of my visit was being taught how to make nsima. My attempts to beat the nsima to make it smooth caused much amusement but, with help, I succeeded. It even tasted alright too. We ate some of it and gave the rest away to a local family.

The information I brought back will now be used as part of the User-Centred Design process as we go forward with the project designing the ecookstove and building a prototype.